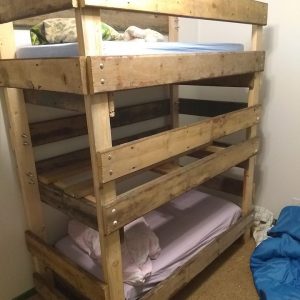 I built this three-high bunk bed for crib mattresses for my kids at a total cost of $7 for a box of screws. The majority of the wood is old deck boards from when I resurfaced my deck last year, and the bolts were scavenged from another old bed. The 2x4s were given to me by a friend when he moved. It’s rustic and imperfect, but solid. The bolts are in various locations from board to board as I placed them to avoid knots and existing cracks. As you can see, there is currently no mattress on the middle bunk–Edna isn’t sure about climbing up into bed yet, and so is on the bottom. When Helen moves out of the crib, Helen will go on the bottom and Edna will move up to the middle. That gives us a few months to get her used to the idea. Previously, Elgin and Edna each had a toddler bed, so there is significantly more floor space in the room now, even though it can now accommodate another child.